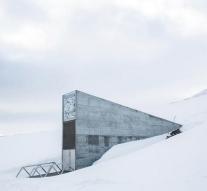 oslo - Scientists are worried about the World Seed Bank on the Norwegian island of Spitsbergen. Due to the exceptionally high temperatures and rain at the end of last year, water has penetrated the entrance of the vault, reports various international media.

That water was soon frozen and did not go any further. Scientists are now questioning the bank's vulnerability. The seeds are stored in a vault deep under a layer of so-called permafrost, soil which until recently was believed to be frozen forever.

The World Seed Bank has been set up to re-plant seeds in the event of a huge disaster. The vault is located at a depth of 120 meters in a mountain near Longyearbyen, the capital of the Norwegian island of Spitsbergen. Among other things, the Center for Genetic Resources The Netherlands in Wageningen supplies seeds to the bank.