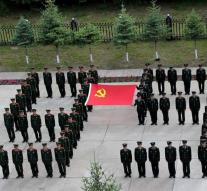 - Taiwan's navy said Friday accidentally fired a supersonic air missile. The missile did not explode, but pierced in the waters between the island and mainland China a fishing boat, leaving one crew member was killed.

The incident occurred while the Chinese leaders in Beijing celebrated the 95th anniversary of the Chinese Communist Party. The Taiwanese Defense Ministry said that the rocket had been fired during an inspection of an exercise by accident.,, That it was politically motivated or intended to create a crisis in the current situation is not the case, '' said a spokesman.

China claims sovereignty over Taiwan since 1949, when the Communists of Mao Zedong won the civil war and the Nationalists of Chiang Kai-shek emigrated to the island. Chinese President Xi Jinping warned Taiwan Friday to redo any steps towards independence.