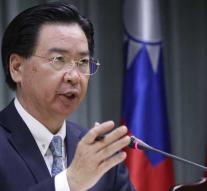 taipei - Taiwan has upset the Chinese government because Beijing would have banned the new Walt Disney movie about Winnie the Pooh. According to some media, the Chinese ban has been instituted because the Chinese president Xi Jinping on the internet is often mockingly compared with the teddy bear.

The Taiwanese Foreign Minister Joseph Wu has placed a picture of a bear, the mascot of the Taiwan tourism industry, on his Twitter account. The bear is 'upset', is there, because of the Chinese ban 'on the film of his nephew Winnie. '

'Make no mistake: all bears are equal in Taiwan', continues in the tweet, with the announcement that the film Janneman Robinson \u0026 amp; Pooh runs in all national cinemas.

The relationship between China and Taiwan is bad. China does not recognize Taiwan as a state and sees the island as an apostate province.