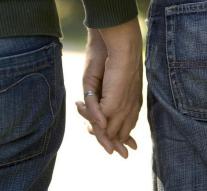 taipeh - The constitutional court in Taiwan ruled on wednesday that married couples may marry. Taiwan is the first Asian country to legalize such a marriage.

According to the court, current laws are contrary to the constitutional rights of homosexuals. The judges have given the government of Taiwan two years to adjust the current legislation. Male and female homosexuals on Taiwan have been seeking legalization of homosexuality for years.