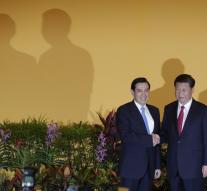 - China and Taiwan have exchanged spies. That happened in the aftermath of the historic meeting between Chinese President Xi Jinping and his Taiwanese counterpart Ma Ying-jeou, the Taiwan government announced Monday.

A spokesman for President Ma said in a statement on a " gesture of mutual goodwill ". China would have freed two colonels from the Taiwanese military intelligence, who were sentenced in 2006 to life imprisonment. Taiwan would have been a Chinese spy at large.

The meeting between Xi Jinping and Ma Ying-jeou took place in early November. It was the first time since the end of the Chinese civil war in 1949 that leaders of the two countries with each sat around the table. Taiwan is seen by China as a renegade province.