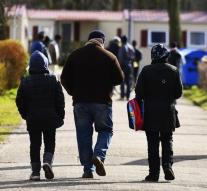 brussels - Asylum seekers who almost certainly get a residence permit in Belgium, as Syrians and Eritreans, having now spend up to five to ten days in an asylum center by. This should foster their integration into society.

The measure would provide clarity for the people who have to remain in asylum centers.,, They are given false hope. With them we can deploy more quickly to return, '' said a spokesman for Secretary Theo Francken (Asylum and Migration) against newspaper De Standaard.

Flemish Refugee Action is positive but puts question marks.,, The 'Direction' on the basis of country of origin is possible discrimination, 'said a spokesman in a comment.