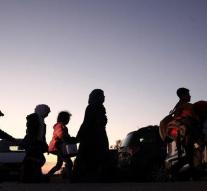 - A forty-Syrian must decade the Hungarian prison because he would have thrown among other stones to the Hungarian police. He was involved in September last year in chaotic situations at the border between Serbia and Hungary.

The man, who lives in Cyprus, traveled with a group of refugees that eventually the border illegally was able to proceed. They broke the gate of a fence open. The condemned man had addressed the crowd with a loudspeaker and therefore fell. When the group broke through the fence, the police seized hard.

Cyprus media reported earlier that the man spent some time on the island, but had traveled to Turkey to get his parents through a smuggling route to Europe. The Hungarian authorities also accused him of terrorist plans. According to Amnesty International, he was therefore able to get theoretically life.

Sentenced Ahmed Hamad burst into tears after the ruling.