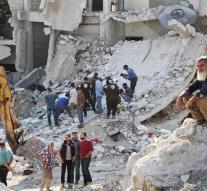 - By an air strike on a village in the Syrian province of Idlib, 22 people were killed including seven children. Which has declared the Syrian Observatory for Human Rights Wednesday.

According to the organization of Syrian activists claimed jet fighters strikes on the village of Haas. Among the targets that were hit was a school. In addition to the children was also a teacher for life.

Syrian television reported the attack on Haas but stated only that a number of militants were eliminated. The province of Idlib controlled by rebel lies in Aleppo in northwestern Syria.