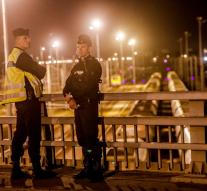 calais - A refugee from Syria has been killed in the night between Wednesday and Thursday on a highway near the Channel Tunnel. The victim is a woman in her thirties.

The woman was hit by a car on the motorway A16 in Calais, near the site of Eurotunnel, said firefighters. The victim was taken to a hospital in Calais, where she died of her injuries.

It is the fifteenth migrant who this year during the crossing of the Channel Tunnel was killed.