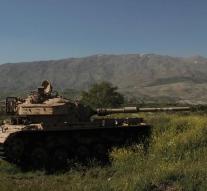 - Syrian rebels have announced a new offensive against the forces of President Bashar al-Assad and immediately the action to the word. The Syrian Observatory for Human Rights reported an attack on the strategically important area of ​​al-Ghab in Latakia province. It added that the separatists have made progress in Hama, also in western Syria. They now have the city Khirbat al-Naqus almost entirely under control.

According to the UK-based research firm, the government army airborne targets bombarded near Homs. Therefore four people would have lost their lives. It is feared that the death toll will rise because of the many serious injuries.

The conflict flared up poses a serious threat to the agreed cease-fire and UN peace talks in Geneva. The fighters of the Islamic State and al-Nusra, which bond with al Qaeda, are not involved there.

Riad Hijab, the coordinator on behalf of the various opposition groups, said it makes no sense to continue the talks in Switzerland as Assad's government and its allies do not stop bombing civilian targets. He accused Damascus of it,, violating human rights and violate international law. '