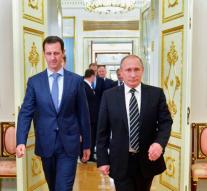 moscow - The Syrian government and members of the Syrian opposition have been talking to each other. That said Russian Foreign Minister Sergei Lavrov on Tuesday.

Lavrov did not say where the talks take place. He called the talks the possible start of a wider consultation later in Astana, capital of Kazakhstan.

Earlier, Russian President Vladimir Putin in Astana that he soon intends to hold negotiations on a cease-fire in Syria. Iran, Turkey and Syrian President Bashar al-Assad have already announced that they will be present.