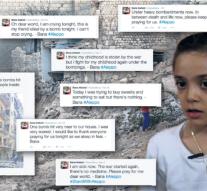 damascus - The fall of eastern Aleppo is near. A disaster for the Syrian opposition which Aleppo was a symbol. Thousands of terrified civilians were beaten fleeing the advancing troops of dictator Bashar al-Assad. One of the victims is Alabed Bana, a girl of seven which together with her mother over the internet message about the hell in which they live and thus gained worldwide fame. The last days of Aleppo through the eyes of a child.

'Best of sleep at night, that I forget the daily bombardments. '- November 20th

The Syrian regime started in mid-November with thousands of militiamen and Russian air support the final offensive against eastern Aleppo. The 250 000 inhabitants are already battered by four years of war and a month-long siege. In all misery there is a small moment of joy for Bana. She loves the Harry Potter films. When author JK Rowling to hear, she sends the girl find the digital books.

'Hello, my friend J. K. Rowling. I started reading your books. My heart is with you. Thank you. '- November 24

The joy was short-lived. One of Bana girlfriend is killed in the bombing. She is not alone. The past two weeks certainly find thirty children death. In school, the hundred thousand children in eastern Aleppo much longer anymore. To the hospital either, most of which are expertly leveled. Bana puts a gruesome picture of her friend, whose blood flows from her head.

'Oh, dear world. I cry tonight. This is my girlfriend who is slain by a bomb tonight. I can not stop crying. '- November 25th\n  \n  \n   advertisement

The desperation increases. Fuel and food are hardly available. The aid packages from the United Nations on; new convoys are not allowed. Assad used starvation as a weapon. He also has other cities on the knees forced. More than a million people are under siege, while activists estimate that there are only food for a few days in eastern Aleppo. The Bana mother lets out a cry.

'Let food increases. Just leave it to. Please, enable it for the thousands of people who are starving here. Why is that a problem? 'November 25

The offensive of the regime has a bloody past weekend break. The troops of Assad conquer one after another district and eventually almost the whole northeastern part of the city. The rebel area shrinking by almost half. Civilians caught in the violence, untold anguish. Similarly Bana and her brothers aged five and three.

'The army has invaded. This may be the last days in which we can speak honestly. Please pray for us. '- November 27

After years of misery save thousands of Syrians forced to flee. Some find shelter in the government section of Aleppo, some pulling in the Kurdish sector. The rebels- according to the UN about 8. 000- can not resist the force majeure. But the population is suffering the most. Similarly Bana, which places a picture of herself, covered in dust.

'Tonight we have a home anymore, it was bombed and destroyed. I saw dead and nearly died himself. '- November 27

Aleppo is the last major city which is partially held by the rebels. Who now have the heaviest losses since 2012 which suffered the fall of the city is only a matter of time. Then it will move the insurgency probably as a guerrilla-like warfare to the countryside. The question is whether there is still Bana. While the world is deafening silence, it sends a message yesterday afternoon.

'Under heavy bombing now. We hover between life and death. Please continue to pray for us. '- November 28