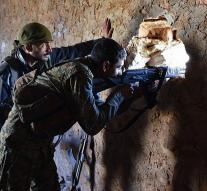 The Syrian government army has continued to make significant gains in the battle for Aleppo. The army and its allies took Sunday's eastern district of Jabal Badro in, after previously the adjacent district Masakin Hanano was captured by rebels.

According to a statement from the Syrian army's Jabal Badro completely under the control of government forces. Saturday Hanano was taken completely. With the advance government forces seem rebels split controlled area of ​​Aleppo in two parts, northern and southern part.

A victory in Aleppo would take an enormous boost for the Syrian President Bashar al-Assad in a war for over five years. Aleppo is the largest city in Syria and in peacetime of great commercial importance.