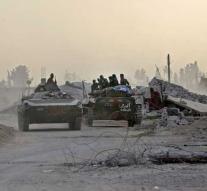 beirut - The Syrian army and its allies have owned more than a third of the rebellious enclave in East Ghouta near Damascus since the beginning of the ground offensive a week ago. That reports the Syrian Observatory for Human Rights.

The offensive of pro-government troops is accompanied by artillery bombardments and air strikes. They have claimed the lives of more than seven hundred people since February 18, according to the observatory in Britain.

Meanwhile, an auxiliary convoy of the Red Cross is on its way to the area. The 46 trucks must, among other things, bring medical supplies and food to more than 27,500 people.