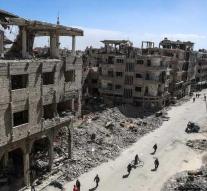 beirut - The Syrian army completely surrounded the city of Douma on Sunday. That reports a military news agency from Hezbollah, which is allied with the Syrian government.

On Saturday, the Syrian army cut off Douma and Harasta, the two largest cities of East Ghouta, from the rest of the rebel enclave. The Syrian Observatory for Human Rights said that soldiers have entered areas between the two cities and the rest of the enclave.

The rebel enclave was divided into three parts that were cut off from each other: Douma in the north, Harasta to the south-west and the third area in the southern part of East Ghouta.

East Ghouta near the Syrian capital Damascus is one of the last areas in the hands of the rebels. In recent weeks, the region has faced the heaviest attacks by the Syrian army since the beginning of the civil war some seven years ago.