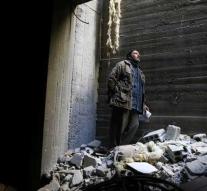 beirut - The Syrian army has attacked positions of the rebels in the East-Ghouta region, east of the capital Damascus. In addition, it claims to have different agricultural land and six villages and towns.

In a statement, the Syrian army reported that a 'large number of terrorists' had been killed and that some of their headquarters, tunnels and fortifications were destroyed, as were their weapons.

According to the Syrian Observatory for Human Rights, hundreds of people have been fleeing violence or hiding in underground shelters. According to the observatory, the government troops have conquered about 10 percent of the area in the past weeks, which was controlled by rebels, mainly Sunni extremists.

An aid convoy that would go to the area on Sunday was canceled. According to a UN employee, the convoy remains on stand-by to provide much-needed help as soon as conditions permit.