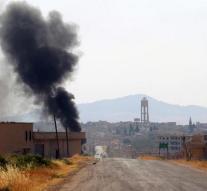 - The Syrian army has launched an offensive to retake areas in the Hama district on rebels.

Rebels managed to win the last few days at strategic points premises in the district in the east of Syria, north of Damascus. Syrian television announced that the army carries out attacks on 'terrorists' in the area.