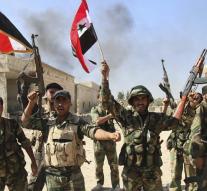 - The Syrian army has made with the support of its allies successes in the western province of Hama. Several towns and villages have been recaptured and the rebels, which the past weeks had strengthened their power in the region, have been expelled. Which have pro-government media reported Saturday. These include whether-Talisiya, al-Qahira and Tel al-Usud.

According to the Syrian Observatory for Human Rights based in London, this was the first time the troops of President Assad showed themselves on the front line since the attack by the Islamist rebels in August. Which then took control in many urban areas across.