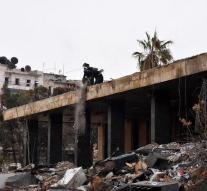 beirut/damascus - Not long after the cease-fire in Syria was discussed there been reports of fighting. A clash between rebels and Syrian government forces in and around the province of Hama causes within two hours after the ceasefire had begun it has been violated.

The Syrian Observatory for Human Rights says rebels violated the file and took place in the province. A spokesman for the Jaish al-Nasr rebels argued correctly that the government violated the file by shelling in villages in the neighboring province of Hama Idlib.

Just before the start of the cease-fire in Syria with air strikes near the capital Damascus killed at least 22 people. In addition, according to the Syrian Observatory killed thirteen civilians, including several children.

Thursday night at 23. 00 am (Dutch time) began a nationwide ceasefire in Syria.