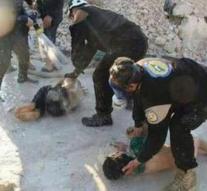 beiroet/damascus - The Syrian government rejects a report on the use of poison gas in April. It is not credible according to Damascus because it is based on 'witnesses of terrorists who are in Turkey.' Turkey is a major pillars of radical Sunni rebels fighting the government in Damascus.

The Organization for the Prohibition of Chemical Weapons (OPCW) in The Hague has published a confidential report on what happened in the Northern Syrian Khan Sheikhoun April 4. The Kremlin has mentioned the report in part. It is not clear what exactly is possible. According to the OPCW, the poison sarin is used. Dozens of people have come to life.

Western countries suspect the Syrian government uses poison gas. The US bombed a Syrian air force base with crossroads as a retardation of the poison gas attack on Khan Sheikhoun. Syria has not denied that this place bombed April 4, but Damascus did not use chemical weapons. If they were scattered, they might have been saved by the rebels.