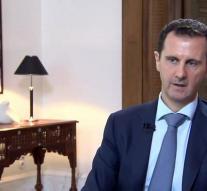 geneve - The Syrian President Bashar Assad's regime must leave within six months if there is a political transition gets underway. This demand comes from the High Negotiation (HNC), the main Syrian opposition group.

Representatives from the HNC in Geneva for talks with the UN envoy for Syria, Staffan de Mistura. Besides the requirement for Assad's departure represents the HNC that none of the government officials in recent years were involved in the civil war can remain in place.

,, Once there is a transition period in Syria gets going, I do not think that the Syrian people want Assad as part of it, '' said spokesman HNC-Salem al-Muslet in an interview with Bloomberg.,, Some of the government can be part of it, those who were not involved in the killing. People who have been involved in the killing of Syrians, I do not think Syria will accept them. ''