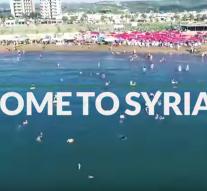 tartous - While thousands of Syrians fleeing beaten for the war in their country, trying to pull the Syrian government of tourists to the country. In the coastal city of Tartous rises one after another luxury hotel.

The state agency SANA used Twitter to encourage the Syrian tourism. When videos of dancing, well-dressed Syrians sipping an alcoholic beverage to enjoy the beats of the DJ, the news agency writes that a holiday in Syria is not inferior to a trip to Ibiza.

The Syrian Ministry of Tourism is working hard to enthuse travelers. Videos that has spread to the ministry, let white beaches, swaying palms and see intact streets. Looking at the movies, will hardly can imagine that there are kilometers away dead by the civil war that holds large parts of the country in its grip.