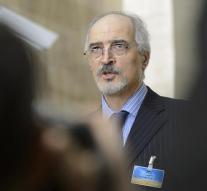 geneve - The talks in Geneva which should bring peace to Syria closer is still in preparation. This was said by the head of the Syrian government delegation, Bashar al-Jaafari, Tuesday after a meeting with UN envoy Staffan de Mistura. De Mistura himself said that the consultation does is officially launched.

Jaafari said Tuesday 2.5 hours with De Mistura and said there,, continues preparations for the start of indirect negotiations ''. There will soon be two teams of negotiators,, but the other side '' delegation has not yet been finalized, said Jaafari.

Groups fighting the government of Syrian President Bashar al-Assad, have demanded that the government first stop bombing and besieging of opponents. The Syrian army assails currently rebels in Aleppo in northwestern Syria.