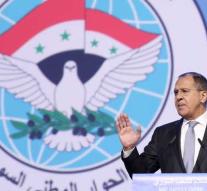 sotsji - During the peace conference for Syria, held in Sochi on the initiative of the Russians, an agreement was reached on the formation of a constitutional committee. In Geneva, he is working on the renewal of the Syrian constitution. That is what TASS news agency drew from Russian Minister of Foreign Affairs Sergei Lavrov's mouth.

The committee will also include representatives of the groups that were missing at the Russian resort on the Black Sea, including the leaders of the largest Syrian rebel movements. Delegates from Western countries stayed away because they felt that the Syrian government was not serious.

UN envoy Staffan de Mistura was of the party. He spoke of difficult consultation. The meeting was interrupted a number of times by protest against the ongoing shelling in Syria. They still make many civilian victims.

The participants in the 'national dialogue' conference on Syria after the war demanded respect for the territorial integrity of the country. The final declaration also stated that the Syrian people themselves must determine which form of government is coming. This must be done democratically through elections.

The document did not mention the name of Syrian President Bashar al-Assad, who is held in the saddle by the Kremlin. His opponents, united in the Free Syrian Army (FSA), argued that the final text was tailored to Assad and his terrorist regime.