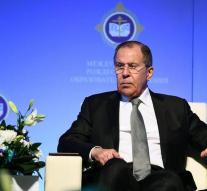 moscow - The next round in the led peace talks being held in Geneva by the United Nations, was postponed. This said Russian Foreign Minister Sergei Lavrov Friday. He talked with rebels and other opponents of Syrian President Bashar al-Assad.

Lavrov accused the United Nations laxity and said that the consultation does not commence in late February. It was previously scheduled on 8 February.

Russia, Turkey and Iran have since launched their own consultations on Syria. These included at the beginning of the week in the capital of Kazakhstan, Astana, including rebels and envoys Assad present. That conversation focused on the maintenance and extension of the ceasefire in parts of Syria.

Talks on a political solution to the conflicts in the protracted civil war would be held in Geneva.