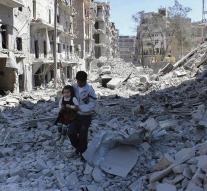 - The European Union lacks the credibility to say something about the civil war in Syria. That the Syrian government said on Wednesday after earlier European foreign ministers had voiced fierce criticism of Damascus ally Russia for their role in the conflict.

European ministers told to send Monday on more sanctions against the government of President Bashar al-Assad. The bombing of Aleppo Russia and Syrian soldiers may be a war crime and should be investigated by the International Criminal Court in The Hague, the criticism was.

'The EU lacks even the slightest degree of credibility when it comes to the humanitarian situation in Syria, because the Union by supporting terrorism, complicit in the suffering of the Syrians' was the Syrian response.