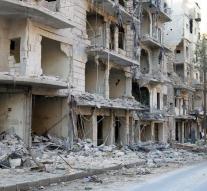 aleppo - The Syrian army wants the truce on Thursday in the northern city of Aleppo took effect should last two days longer. The cease-fire would last eleven, but the Syrian state news agency reported on the authority of the military leadership that Friday and Saturday a 'humanitarian truce' between 08.00 and 19.00 local time is observed.

After entering the cease-fire remained in Aleppo calm. The Syrian Observatory for Human Rights said that as yet no violations have been reported.

The eastern part of Aleppo controlled by rebels received in recent weeks to endure the toughest Syrian and Russian air strikes since the beginning of the civil war in March 2011. In the besieged area to stay an estimated 250 000 people who lack food, water and medical care.

Russia says the truce rebels and civilians should enable to leave the east of Aleppo. According to the Observatory people make that any party. The rebels say that a retreat tantamount to capitulation. They demand that the Syrian army left open corridors for civilians come under the supervision of the United Nations.