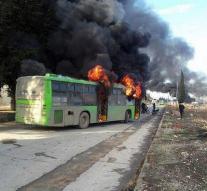 damascus - The Syrian army takes from midnight (local time) a ceasefire respected. Only operations against Islamic State, the former Nusra Front and all groups to continue connected to it, as the army announced Thursday. The Russian President Vladimir Putin has reported this. He also said that Russia will reduce its military presence in the country.

Turkey and Russia will be responsible for the file, said Turkish Foreign Minister Mevlüt Cavusoglu. He called it very important that countries use their influence over armed groups to stop these groups fighting. He added that the cease-fire an exception is made for organizations that also by the United States are considered as terrorist.

The cease-fire should pave the way for negotiations on a political solution to the more than six-year conflict in Syria.