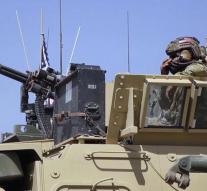 washington - Air strikes in Iraq and Syria through the US-led coalition have cost 352 citizens since the beginning of the actions in 2014. That was announced by the US Department of Defense on Sunday.

42 reports of civilian deaths are being investigated, according to the Pentagon during the monthly meeting on victims of actions in the region.

The official number of the US department is well below that of other groups such as the Airwars observation group. That holds on more than 3,000 citizens who died.

The Pentagon declared its regret of the loss of civilian life.