Home / World / 'Syria: Aleppo aid only through our' 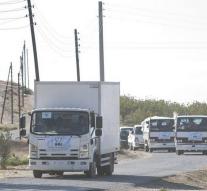 - "The Syrian government is only prepared to allow emergency aid to the besieged city of Aleppo as coordinated with her and the United Nations. That Syrian state media reported."

"Especially aid sent by Turkey do not have to rely on free passage.,, The Syrian Arab Republic rejects humanitarian aid to Aleppo that is not coordinated with the Syrian government and the United Nations, especially if it comes from the Turkish regime, '' said a statement from the Foreign Ministry."