Home / World / 'Syria agrees to peace plan US and Russia' 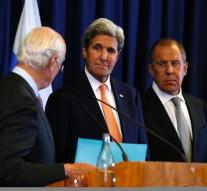 - "The Syrian government promised to cooperate with the truce by Russia and the United States negotiated. Writes the Syrian state news agency SANA."

"Sources told SANA that the cease-fire is an important tool to achieve political solutions to the crisis in Syria."

"The US-Russian agreement includes a cease-fire Monday night must go across Syria. This enables humanitarian aid to be given to the population, including in the hard-hit city of Aleppo."