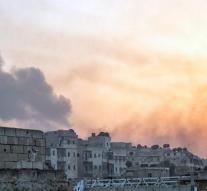 - Syrian state media report Sunday that the rebels have fired poison gas to parts of the city of Aleppo belonging to government forces in hands. The Syrian Observatory for Human Rights says it has received reports of government soldiers in two places at the front who had respiratory problems. Whether it was chlorine gas, the Observatory could not say.

The director of a hospital in the government section of Aleppo told state television that 36 people- soldiers as well as civilians- were suffocated due to inhaling chlorine gas. The state news agency SANA said that in the residential al-Hamdaniuya ' with poison gas grenades' were smashed, but made no mention of deaths.

A spokesman for the rebels took the messages as ' a lie. '

The rebels began Friday an offensive to break the siege of the eastern part of Aleppo.