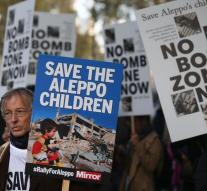 Reported UNICEF. According to the UN children's organization, there are only nine slain all school children in the past two weeks. In the war-torn country, one in three schools can not be used by war because they are damaged or destroyed. They are also used to give shelter to displaced persons or for military purposes.

' I myself was a few months ago at a school in Aleppo with more than a thousand students. By an attack that school was useless, 'said the Dutchman Bart Vrolijk, chief of UNICEF education in Syria.

In September this year, UNICEF with partners launched a campaign to provide 2.5 million children of school supplies and books. Among them are 200 000 children living under siege and in hard to reach areas. More than 1,200 young volunteers going door to door to help those children.