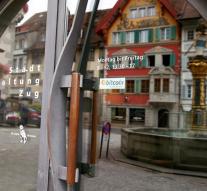 bern - Rail passengers in Switzerland will be able to use the ticket machines at stations to buy bitcoins. Railway company SBB is going to do a test with it. Which begins on November 11 and lasts two years. SBB let it know Friday.

According to the railway company, there are few ways to get bitcoins in Switzerland, while the country has more than a thousand ticket machines at stations. Which are scattered across the country and work 24 hours a day.

People need later with their smartphone to scan a QR code on the machine to identify and reach their wallet. Then they may get a minimum of 20 and maximum of 500 Swiss francs bitcoins. Which is converted 18 to 460 euros. Then they have to enter a TAN code, like online banking. It is not possible to pay by bitcoins at the card vending machines.