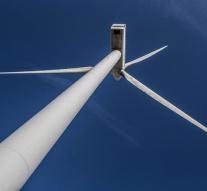 zurich - The population of Switzerland is behind the government's plans to invest billions in renewable energy and a ban on the construction of new nuclear power plants. That is the outcome of Sunday's binding referendum in the country. According to preliminary figures, 58.2 percent voted for the plans.

The Swiss initiative reflects efforts elsewhere in Europe to reduce dependence on nuclear energy. Germany strives for the closure of its nuclear power plants in 2022. Austria has said nuclear energy decades ago.

'The results show that the population wants a new energy policy and does not want new nuclear power plants,' said Energy Minister Doris Leuthard. She added that the new law will strengthen the use of sustainable energy generated in the country and reduce the use of fossil fuels. Also, the country will be less dependent on foreign energy.

'This law leads our country to a future with modern energy,' she said at a press conference. Some parts will already be in force at the beginning of next year. The debate on the 'Energy Strategy 2050' Law focused on what customers and taxpayers should pay for these measures and whether the wind and solar energy quadrupled by 2035 will be sufficient.

According to Leuthard, the new package costs the Swiss average 40 francs (about 37 euros) per family per year. According to critics, a family of four people converted more than 2900 euros per year. In addition, according to them, the country would be more dependent on imported electricity due to the changing yield of wind and solar power.