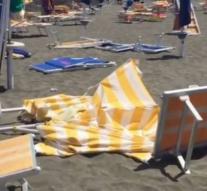 rome - Through a whirlwind, 10 bathers on the beach at Ostia, near Rome, were injured on Sunday. Parasols and sunbeds were sucked in more than three hundred meters. According to an eyewitness, it was an 'apocalyptic scene.'

Six people had to be hospitalized, one of them had headaches. Four people were treated on site. Nobody got hurt badly. The windhole came completely unexpectedly. After the wind had disappeared, the weather was radiant again. Ostia is about thirty kilometers from Rome.