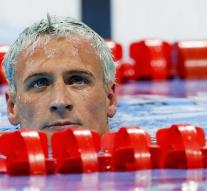 - US swimmer Ryan Lochte was robbed Saturday night along with three others in Rio De Janeiro. That confirmed the medalist at NBC.

Lochtes mother told USA Today that her son was robbed when the taxi in which he was stopped to refuel. Under threat of a weapon occupants had to hand over their wallets. According to the mother, he was unharmed.

The IOC initially denied the report.