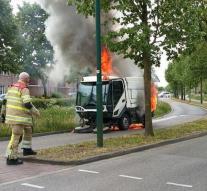 montfoort - A municipal caravan was flown on fire in Montfoort on Wednesday afternoon.

The flame of the car was unclear. The vehicle was in the middle of the road, at the junction of the Parklaan with the Wederiksingel in Montfoort.

The fire department partially opened the sweeper to extinguish the fire, let the police know.

Due to the fire, a lot of smoke occurred. The road is temporarily closed for traffic.