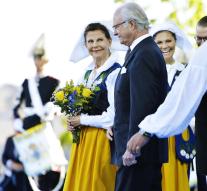 - Thousands of residents of the Swedish capital, Stockholm, welcomed the royal family on Tuesday.

This happened during the traditional horseriding because of the Swedish national holiday. The family went by car from the Royal Castle to the open-air museum Skansen.

Partly due to the nice weather, it was quite busy along the route in the center of the city. The royals were divided into three carriages. In the first place, King Carl Gustaf and Queen Silvia lived. Then the carriage came with Crown Princess Victoria, Prince Daniel and Princess Estelle. In the third carriage, Princess Madeleine and her husband Chris O'Neill and Prince Carl Philip and his wife Sofia were sitting. Chris did not attend the last two times.

Once arrived at Skansen, the little Estelle farewell from her parents. The princess was brought home while the other royals were present at a big party. Premier Stefan Löfven held a speech and there were performances by Swedish artists. Carl Gustaf also took the floor. He asked the public to 'live Sweden' with him. 'To honor our beloved country,' said the prince.