Home / World / Sweden will need support from EU for refugees 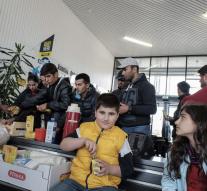 stockholm - Sweden wants to apply for emergency assistance from the European Union to assist with the large influx of asylum seekers in the country. That the government reported Thursday.

" The situation is extremely tense ", said the labor minister, Ylva Johansson. " We have decided that the Swedish Migration Agency EU funds and emergency requests from the Asylum, Migration and Integration Fund. "

The agency predicts that this year 190 000 asylum-seekers coming to Sweden, doubling the record from the beginning of the nineties.

Sweden has asked the EU to move some of the refugees to other countries.