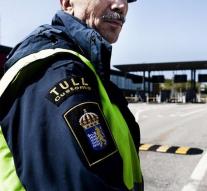 stockholm - Anyone traveling from Denmark to Sweden does not have to show a passport at the border. Sweden stops identity checks in trains, buses and ferries next week.

The controls were introduced last year because Sweden did not handle the influx of refugees. By 2015, the country registered more than 160,000 asylum applications, about three times as much as the Netherlands. The influx has recently declined dramatically. 'We will not go back to the levels of then,' said the Swedish Interior Minister Anders Ygeman on Tuesday.

In other places and in other ways Sweden will increase the border guard. For example, there are more surveillance cameras, X-ray devices and license scanners.