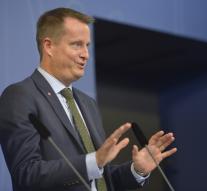 The decision underscores the growing concern in Sweden that limit the influx of asylum seekers has been reached. The country anticipates that this year to 190 000 asylum seekers will come to Sweden, double the previous record from the early nineties. Since September alone, 80 000 refugees traveled to the country. The government had last week warned that the migrants can not guarantee more housing.

Ygeman said that the checks are valid for a period of ten days, but may be extended to twenty days.