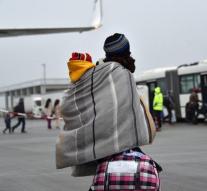 strasbourg - Sweden does not currently include more refugees. On Tuesday the European Commission agreed to the request for a suspension. Sweden gets one year grace due to overload.

The country groans under the stream of refugees. In one year, the number of asylum applications by 60 percent.European countries have agreed refugees from Greece and Italy to redistribute across Europe. Countries can they receive a temporary exemption if they can demonstrate that there is an emergency and that safety is compromised by a sudden huge influx.Sweden has Europe 's highest number of asylum applications per capita, according to figures from European statistics office Eurostat.
NEW