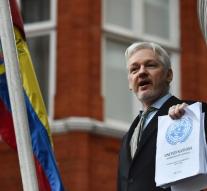 - Justice in Sweden Julian Assange Monday under police escort not given permission to attend the funeral of a close friend. That decision has his heart broken, he announced Friday. The founder of WikiLeaks is since 2012 in the London embassy of Ecuador to avoid extradition.

The Australian has to answer in Sweden in connection with allegations of sex crimes but is afraid that, after serving any sentence, beeline is forwarded to the United States. There awaits him probably trial for the disclosure of thousands of documents from its disclosure platform.

Assange had asked at the funeral of Gavin MacFadyen, director of the Center for Investigative Journalism, to be allowed to be. Sweden, however, sees no reason to make an exception and maintains the arrest warrant against Assange.