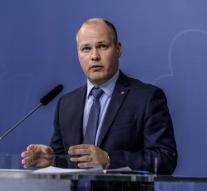 stockholm - The Swedish Minister for Migration Morgan Johansson has called on refugees not to come to Sweden but staying in Germany. According to the minister his country, one of the most welcoming countries for immigrants in Europe, reached the limit of what it can to accommodate migrants.

According to German media have displaced people now arrive in Sweden the choice to return to Germany or Denmark or to find an accommodation. " We are in a dramatic situation that has been exacerbated in recent days ", said Johansson. Sweden 190 000 refugees expected this year, twice as much as previously assumed.

Johansson announced Thursday that Sweden already going to request emergency assistance from the European Union to assist with the large influx of asylum seekers. At this time, arriving about two thousand displaced people a day in the country. Among them are many refugees who were first in tents in Germany. In the German city of Rostock would wait about five thousand asylum seekers until they could to Sweden.