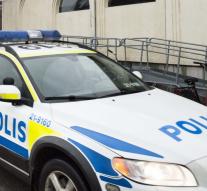 stockholm - The Swedish police on Thursday arrested a man who was suspected that he wanted to commit a terrorist attack in the country. Swedish media reports said.

The arrest took place in the city Boliden. It's the 25-year-old Majid Mutar Muthanna, originally an Iraqi.

On Wednesday it was announced that the Swedish authorities were hunting for a terror suspect. The threat level was raised to the highest ever in the country. The security of public buildings such as railway stations and the parliament was increased.