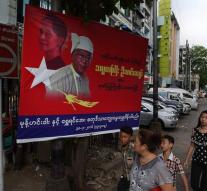 rangoon - Aung San Suu Kyi, leader of Myanmar in fact, has vowed to build a democratic federal union in which there is room for ethnic minorities. Specific populations they are not however mentioned.

,, Our democratically elected government is responsible for all citizens, and to treat everyone equally, with love and compassion. That's why we give high priority to national reconciliation, '' said the Nobel peace prize winner. She praised the initiatives of the previous semi-civilian government to close ceasefires with various groups.,, We are continuing our efforts (...) To achieve a complete cease-fire. ''

Myanmar, formerly Burma, has since had to contend in 1948 became independent from Britain with armed insurrections of ethnic minorities. A group that has to do with discrimination against the Muslim Rohingya, considered by many in Myanmar as illegal immigrants. Suu Kyi has not explicitly recognized for them so far.