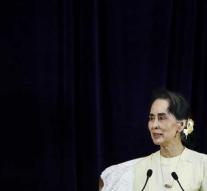 oslo - The Myanmar leader Aung San Suu Kyi does not have to worry about having to hand in her Nobel Peace Prize. The rules do not allow the prestigious award to be withdrawn, says the Norwegian Nobel Committee.

Suu Kyi is under attack internationally because of the human rights violations in the Myanmar state of Rakhine. There the army has acted with great force against the Rohingya minority. UN researchers say that Suu Kyi failed to 'put her position as de facto government leader' and 'moral authority' in the fight to protect the population.

Critics want Suu Kyi to be stripped of her Nobel Prize, but that is not the issue. 'Aung San Suu Kyi won the Nobel Peace Prize for its fight for democracy and freedom until the year 1991', emphasized the secretary of the Nobel Committee. The politician at that time was peacefully opposed to the military rulers in her country.