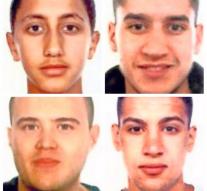 barcelona - The Catalan police, the 'Mossos' say that Younes Abouyaaqoub, 20 years, is the only terrorist who is still in flight after the attacks on Barcelona and Cambrils. Meanwhile, Spain has communicated to France information of one of the rented buses likely to be involved in the attacks, in case the border would cross, so says France Info. It's a white Renault Kangoo.

Of the other suspects, seven were killed and four were arrested. In the meanwhile, the Spanish government is in line with level 4 of the 'alerta antiterrorista' but with 'strong resources'. This was decided in a meeting with the Ministry of Interior this afternoon, after consultation with police and CNI experts.