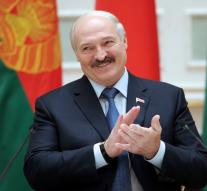 brussels - European sanctions against about 170 Belarusians are temporarily suspended. Their travel ban and the freezing of their funds to be eliminated, yet for four months.

That the member states of the European Union agreed. The decision is a response to the release by the authoritarian regime of all (six) political prisoners in August.

Furthermore, the improving relations between Europe and Belarus, the ministers report Thursday in a statement. The hope is that the suspension has boosted here. Friday officially announced that the newly ' elected ' President Alexander Lukashenko is among the 170, but the expectation is that this is the case.

The sanctions would last Saturday, but remain in force for four Belarusians who were involved in disappearances of people. The arms embargo remains in force.